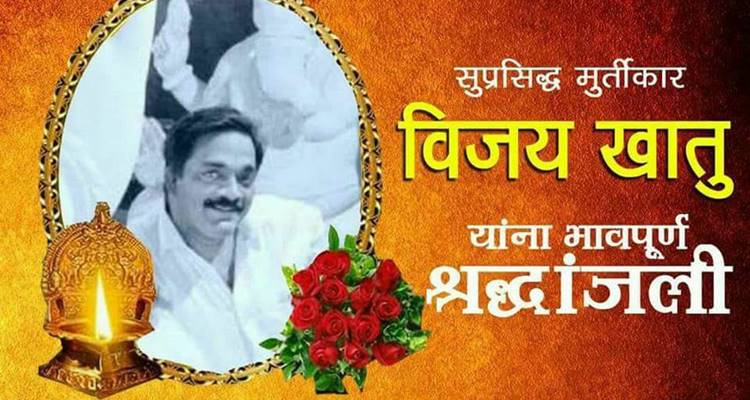 Ganesh festival is just a month away and people have already started their preparations for the much-awaited festival. Colorful decorations, beautiful idols, sweets and prayers just sum up the festival. However, the festival won’t be the same as before, popular “Lalbaug Cha Raja Murtikar” Vijay Khatu’s death news came out yesterday and has sent a shock wave in Maharashtra. Vijay Khatu’s news has left us all saddened and we will miss him and his idols for the rest of our lives. Here’s our Vijay Khatu wiki to honor the late idol maker.

Vijay took his last breath at his Dadar residence yesterday. Some reports claim that he died due to a heart attack. Vijay Khatu’s age was reported as 63 before his death. Vijay’s funeral will take place at the Shivaji Park crematorium.

Vijay Khatu and his brother Rajan Khatu started working as Ganesh idol sculptors and have worked on famous idols like “Ganeshgalli Ganpati”, “Chinchpokli Cha Chintamani” among many others. Khatu’s best work till date is the “Lalbaug Cha Raja” which is the fame of the Ganesh Utsav Mandal, Mumbai. Khatu’s workshop was in Parel where he worked along with many other sculptors. Ganesh was a pioneer in the sculpting business and had been in the same field for around 46 years.

Vijay started working as a sculptor at the age of 14. He was studying in the seventh standard while he started sculpting. Vijay was helped by his two brothers and they initially started off by painting pots in the shops. Vijay and his brothers’ skills included adding gestures to the Ganesh idols and the eye-catching features of these idols.

Vijay’s father Ramkrishna Khatu was also a sculptor and worked at the Poddar mills.Vijay initially worked at the Swadeshi mills for six years before it was shut down.

Vijay has sculpted many famous idols throughout his lifetime. Apart from Lalbaug Cha Raja, in the year 2012, Vijay sculpted more than 30 giant Ganesh idols for the Ganesh festival. Vijay was the winner at the World Tableau Competition in Manhattan, the USA in 2005, where he represented India.

Vijay was a very humble man. He would wear a white colored Kurta and cotton trousers to work every day. Vijay devoted his entire life to making idols. In his career spanning around 50 years, Khatu made more than 500 Ganesh idols of 25-feet. His idols are famous in Mumbai, Nashik and Pune. Since his childhood, Vijay skilled himself in making small Ganesh idols and later learned the art of making large idols.