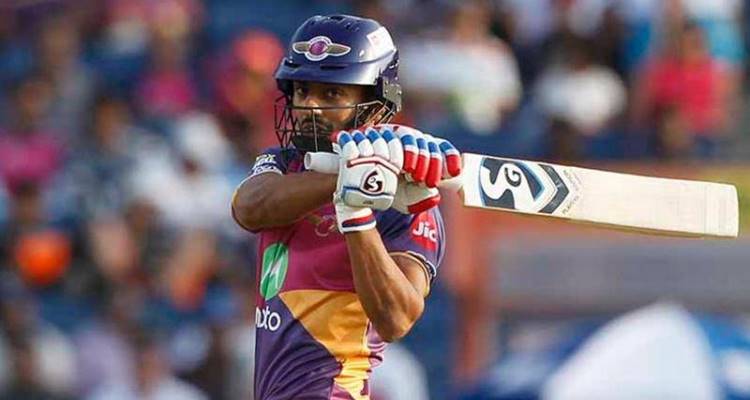 The Rising Pune Supergiant were guided to a win by Rahul Tripathi’s impressive knock of 93 off just 52 balls. With an easy target of 158, Pune had no problem winning the game. But with the likes of Ajinkya Rahane and Steve Smith losing their wickets early in the game, the situation looked dismal for RPS at one time. But the newcomer stood up to the challenge and proved his worth with a match-winning performance. Here’s Rahul Tripathi’s wiki to know more about the RPS star.

He Hails from the Hometown of Indian Legend M.S. Dhoni

Rahul Tripathi’s family has origins in Ranchi, Jharkhand. The city has a created a standard by nurturing a legend of Indian cricket, none other than M. S. Dhoni. And what a co-incidence, both the Ranchians play for the same team in the IPL.

He is currently a resident of Pune and is living there since many years. He attended the Army Public School. He was born on March 2, 1991.

He Plays for the Maharashtra Team in First-Class Cricket

Rahul Tripathi’s age is 26 years and he has been playing First-Class cricket for quite some time. His profile is pretty strong which includes three centuries with a high score of 132. Establishing yourself as a consistent performer isn’t easy given the competition one has to face.

His First-Class debut for Maharashtra was against Baroda in 2012. He has been batting as an opener for the Maharashtra team since his debut.

He was bought by the Rising Pune Supergiant for ₹10 Lakhs

Being a local player, he attended the selection trials for the Pune team before the auctions. Owing to his consistent track record, he was bought by the Pune franchise for a base price of ₹10 lakhs at the IPL auction.

Being such a cost effective player, he has proved his worth in almost every match he has played for the Supergiant.

He has achieved his eighth consecutive 30+ score in this IPL which is a remarkable feat given the fast format of the game. His score of 93 was his highest till date and it marked his maiden half-century in the IPL.

Well, what else does one want? Our one and only Sir Jadeja (whom we like to call The Troll Emperor) has said that he would be a part of future India playing the role of an opener. Alongside Rahul, he also stated that Nitish Rana will open and Rishabh Pant will be one down.

As compared to the current generation, Rahul Tripathi’s Facebook profile has a mere

Rahul is a clean striker of the ball and has impressed us with some high flying shots last night. We hope to see hard hitting from the young gun and ultimately make it to the much respected and loved Team Blue.