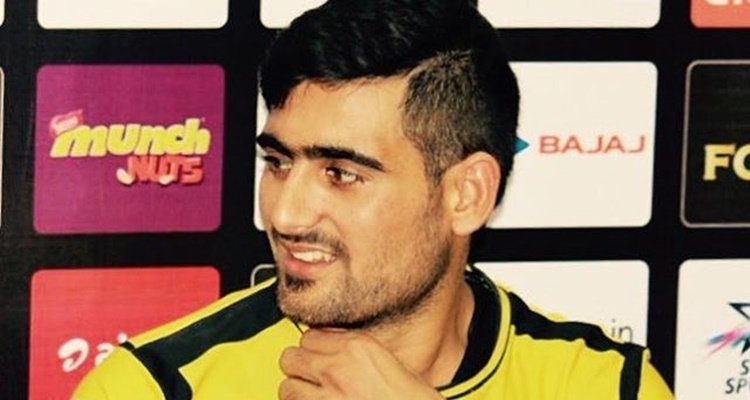 Rahul Chaudhari is the new sensation in Kabaddi world and is all set to rattle the Pro Kabaddi League 2017 with Telugu Titans. The Telugu Titans captain is one of those players who has earned a lot of praise for his consistency and temperament towards the game. Several youngsters who have taken up Kabaddi, look up to Rahul as their idol. The poster boy of Indian Kabaddi has a fanbase, which is not only limited to India. He has admirers in many nations as well where Kabaddi is followed. Here’s everything to know about the Telugu Titans captain in Rahul Chaudhari’s wiki.

Rahul was born in Bijnore district in Uttar Pradesh on June 16, 1993. Rahul started playing Kabaddi at the young age of 13. Rahul Chaudhari’s age is 24 years as of 2017. His passion for Kabaddi was so impregnable that he even took a beating from his father! Yes! You read that right. In an interview during Pro Kabaddi League, he admitted that his family didn’t support his passion for Kabaddi. He would often run away from his house to play Kabaddi. This led to scoldings from his mother and occasional bashing from his father.

Rahul now laughs at the memories of past struggles and is determined to keep working hard and improve on several aspects of his game to attain ultimate perfection.

The poster boy of Indian Kabaddi has some outlandish numbers when it comes to making records. The decorated raider scored a whopping 151 raid points in season 1 of the Pro Kabaddi league. He was only second to Indian Kabaddi team skipper Anup Kumar. Rahul was voted as the best raider of season 4 after scoring 146 raid points, the highest in season 4. He holds the record for the most number of raid points (482) and total points (517) in the history of the Pro Kabaddi League. Rahul has won several games for his team and has earned some crucial raid points when his team needed it the most. On many occasions, he has single handed pulled his team out from the jaws of defeat. No wonder why Rahul is one of the fan favorites. Rahul Choudhari’s records and stats easily put him on an advantage over the other league players.

Rahul Chaudhari’s Telugu Titans’ journey has been succesfull so far. Rahul has played 57 matches in all PKL seasons. He has raided the opponents 957 times of which included 385 successful raids and helped him get 482 total raid points for his team. The remaining 411 empty raids and just 161 unsuccessful raids didn’t stop Rahul from delivering heart throbbing performances for his team. Rahul has also contributed in defense. He has a total of 35 defense points with 31 successful tackles.

Rahul was also part of 2016 South Asian Games winning squad. It wasn’t a surprise to see him perform brilliantly during the tournament. He also captained the Indian Kabaddi team in 2014 during Beach Asian Games in Phuket, Thailand. During the tournament, his talent was identified by coach Uday Kumar who selected Rahul in the Titans’ lead attack.

Rahul’s stats are dreamlike, but one has to look at the blood and sweat behind these numbers. Rahul’s years of hard work, grit and never give up attitude are the reasons where he is today. We at SocioFreak would take inspiration from Rahul and also urge our readers to follow the likes of him.