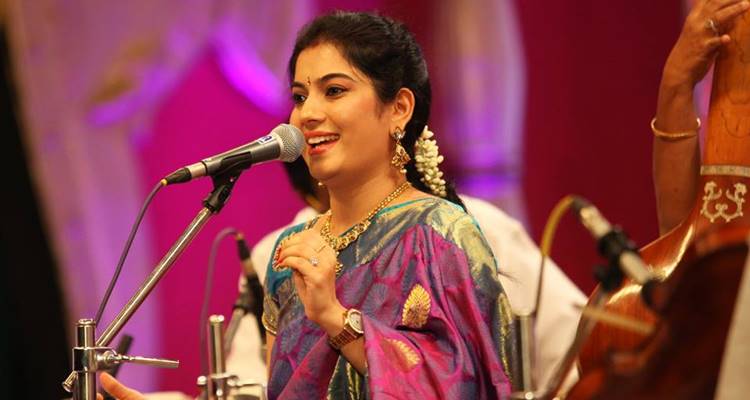 Dr. Shobana Vignesh popularly known as Mahanadhi Shobana is one of the leading Carnatic musicians in India. Her classical songs are popular in every nook and corner of South India. Hailed as a child prodigy by many, Shobana has always left us spellbound with her enchanting voice. Here are some mind-blowing facts about the classical singer in Mahanadhi Shobana’s wiki.

Mahanadhi Shobana has been in the industry for long now, however, her age is not known. Details about her personal life are a secret to us and she likes to keep a low profile.

Shobana entered the glamorous world of movies at a very young age. Her first movie as a child actor Mahanadi, was a National Award winning drama film. Mahanadhi’s brilliant performance in the movie was appreciated by fans and critics alike and soon the name “Mahanadhi Shobana” became her new identity. Mahanadhi never turned back from that time and went to achieve several accolades in her life.

She made her Recording Debut at the Young age of 11

The prodigy didn’t stop after her first movie. She decided to enter the music industry. Nothing holding her back, Shobana recorded her first song at a tender age of 11. She was one of the youngest singers who recorded a song at such a small age. From there on, she has released more than 140 albums recording over 1500 songs in various Indian languages. Mahanadhi Shobana’s songs have mesmerized all the Indian people.

Shobana doesn’t just have a sweet voice but is also highly qualified in the field of music. She completed many courses ranging from graduation to her doctorate which makes her one of the highest qualified musicians India has ever produced.

Shobana completed her schooling from Padma Seshadri Bala Bhavan Senior Secondary School, Chennai. Her initial schooling had a lot of impact on developing her singing skill. She was a cultural ambassador of her school and also won several laurels in various singing competitions. To appreciate her talent, Bharat Kalachar awarded her with the cultural scholarship for Carnatic Vocal Music for eight consecutive years, which even in today’s time is considered as prestigious.

Shoba has an interest in the music of various genres. She has passed 8 grades in the Theory of Western Classical Music and 6 grades in Western Classical Piano Exams from the Trinity College of Music, London. Her musical explorations have been recognized all over the world.

Here’s a complete list of all the Qualifications of Mahanadhi Shobana:

She has also published several research papers and books through the years.

She has Performed all Over the World in Countries like Sri Lanka, Singapore, Malaysia and the United States

Having a magical voice, Shobana has enthralled audiences all over the world. She has performed in many countries along with several shows in India.

She has won 15 Awards Throughout Her Music Career

Shobana’s magnetic voice just impresses us every time. Her singing talents have been appreciated time and again and she has been awarded for her voices numerous times. She received the award for “Young Achiever of the Year 2002” from the Cosmopolitan club of Madras. For her excellence in Carnatic music, she was awarded the “Individual Artist Award” by the Maryland State Arts Council, the USA in 2010. Winning an award overseas is really commendable. We do not see many Indians being appreciated so widely for their works. She has many more accolades to her name and the list just doesn’t end.

With mastery over Carnatic music, Mahanadhi Shobana continues to impress musical enthusiasts all over the world. She has been in the music industry for more than two decades but her voice still continues to entertain us. There is an aura in her voice which makes us listen to her again and again. We wish her good luck for her future projects and are eager for more music from the classical maestro.