Lisha Sharma: Everything You Need to Know about Hardik Pandya’s Girlfriend

Hardik Pandya, the young gun from Baroda is striving hard to make a mark in the Indian cricket scenario. From being an aggressive batsman to a calm bowler, he has done it all. But what people don’t know is that in real life, he has been clean bowled by this Indian beauty, Lisha Sharma. Lisha Sharma, the girlfriend of Hardik Pandya is a 22-year old carving her name in the tough world of modeling.

Lisha Sharma is from Jamshedpur and Currently Lives in Kolkata

Lisha was born in Jamshedpur and lives in Kolkata since the past seven years. She has been spotted multiple times in Kolkata with Hardik including some popular shopping malls. They were also spotted together at the Hub, Taj Bengal.

She is a Model who has Worked with the Likes of Manish Malhotra, Sabyasachi Mukherji, Wendell Rodricks and Anamika Khanna

Lisha shifted to Kolkata along with her parents for pursuing graduation. She met Sabyasachi Mukherjee at a college fest. Impressed by her elegance and good looks, Sabyasachi offered Lisha her first modeling assignment. She did not hesitate a moment to accept such a huge offer. Since then, she hasn’t looked back and is making her name in the fashion industry working on assignments of famous designers including Manish Malhotra, Wendell Rodricks, and Anamika Khanna. Lisha Sharma’s hot pics on Instagram have her fans swooning all over her during her public appearances. Her sexy gray eyes caught everyone’s attention instantly.

She is Very Close to her Mother

Lisha Sharma is a Hindu by caste. She shares a special bond with her mother and asks for her advice before taking major decisions in life. Her mother has been a support system for her throughout her life; says the 22-year old model. Lisha gives all the credit for her success to her mother and looks to make her proud at every stage of her life.

Hardik and Lisha met during the eighth season of IPL in 2015. He was a new face in the cricket world at that time but his performances for the Mumbai Indians were talking big. While attending an IPL party in Kolkata, Hardik and Lisha were introduced to each other. They had a very entertaining conversation and exchanged their numbers. This meeting was the beginning of their love affair and their relationship continued to develop over the period of time.

Being just like any other couple, the two had clicked many photos together. During the T20 Word Cup 2016, Hardik Pandya played a key role in Bangladesh by bowling a brilliant last over which eventually led the Indians to a narrow win. Celebrating this occasion, Lisha Sharma took to Instagram to congratulate him and this was the big announcement about their relationship.

Lisha and Hardik are dating for the past two years and have managed to stay away from the eyes of the paparazzi for quite some time now. 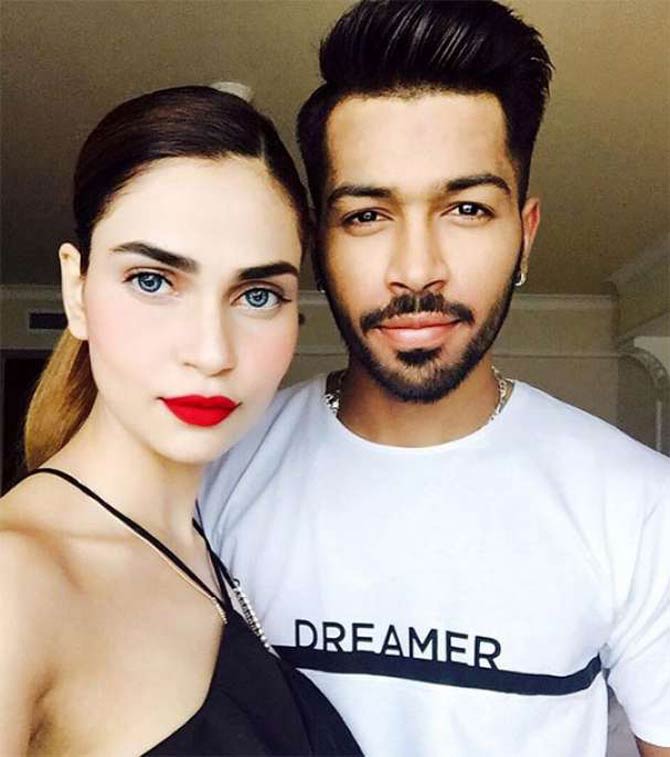 After his brilliant performance at the T20 World Cup, Lisha did not hesitate for a moment and announced the big news on Instagram. She posted a photo with him calling him ‘My Boo’ with hashtags #allrightsreserved and #taken. The photo has now been, however, deleted. These indications are pretty clear for us to understand what’s going on between the two. However, we haven’t seen any updates on her or Hardik’s Instagram recently.

She is a Big Fan of Ranveer Singh and Aditya Chopra

Lisha Sharma is a complete Bollywood buff and admires Ranveer Singh and Aditya Chopra. She is also working in Mumbai and dreams of making a Bollywood debut too.

She Thinks Hardik Pandya is Chivalrous, Grounded, Calm and Perfect

Ever since she made their relationship public, media has been on her tail to get a scoop about the hot hunk from the gorgeous lady. Finally, Zee News made the news by getting an exclusive interview with her. During that interview, she said that Hardik is a gentleman in every way, she also added that he is chivalrous, grounded, calm and perfect.

Hardik and Lisha look adorable together and we hope to see more of them in the coming days. We also wish Lisha all the best for her career!