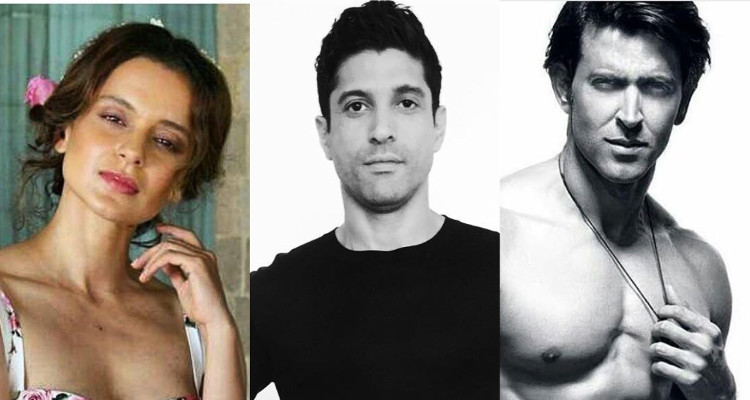 Kangana Ranaut and All India Bakchod collaborated for a video song which was posted on All India Bakchod’s YouTube channel. The song is titled “The Bollywood Diva Song” and it takes a serious dig at some of the most frequent stereotypes faced by Bollywood actresses. The video has raised a lot of serious issues from Bollywood and is the second most trending video on YouTube right now. It’s no doubt that this video, just like every other AIB video has become viral!

Kangana has been in the news for quite some time, thanks to her revelations about her silly ex Hrithik Roshan, Koffee with Karan “episode” and Aap Ki Adalat interview which went viral and is still making the rounds of our social media feeds. On the other hand, AIB has had their fair share of controversies (we all still secretly watch AIB’s roast of Ranveer Singh & Arjun Kapoor, don’t we?) and are creating some of the most realistic and relatable videos for the millennial generation. Some of AIB’s best videos include Honest Engineering Campus Placements, A Woman’s Besties, Online Harassment Order Now! and the list goes on!

Two members of “All India Controversies” group (AIC: our own improvisation from AIB!) have come together to expose the age-old customs of the Bollywood industry and it sure as hell is a nasty blow to some of the biggest names in the industry today. Kangana Ranaut’s AIB video suggests that she is all but to abide by the so-called “Bollywood rules.”

Here’s “The Bollywood Diva Song” for those who haven’t watched it yet:

Without wasting any time, here are 7 naked truths exposed by the Kangana Ranaut – AIB video.

Bollywood has been a male-dominated industry since like.. FOREVER! Women have been given little to no importance at all limiting their character to a mere love interest in the movies. Kangana & AIB have traded some nasty blows against this age-old system and our fingers are crossed to see how they might bring a change in the B-town!

Short & sexy clothes which have absolutely zero relevance to what’s going on in the movie. How often have we seen that? Well, who the f*** wears mini-skirts and short dresses in the office in a country like India where you are judged for almost anything you do? In my opinion, not even 10% women might be wearing such clothes to the office. Movie makers should understand how to connect with the audience better. And most of all, a woman in a movie is much more important than just to “excite” the viewers.

Nepotism… anyone? Well hey, if not for that, would it have been that easy for the Khans and Kapoors to be a part of this industry? What we are told is it’s very hard to survive in this industry, one-two flop movies and you are done. Then why are these people given such a privilege? Do they even deserve it? Why not encourage and give opportunities to the talented people? We will never get answers to these questions, wonder why? We’ll never know why!

#4 Directors in Bollywood are Super-Egoistic

There have been incidents when actors tried to add some value to the movie other than acting only to be discouraged. Kangana herself has faced this issue multiple times when she tried to suggest something but was shrugged off and told it’s not her job! Will this ever change?

The above line says it all. And this is not just limited to movies since centuries women are ill-treated and their opinion doesn’t matter. In so many households, women are only expected to take care of the kitchen. The society is changing for sure, women are being appointed to authoritative positions in large organizations and they are successfully leading businesses on the path to glory. We hope this changes in Bollywood too!

We have seen endless stories of women who had to give up their acting careers after marriage. From Madhuri Dixit and Aishwarya Rai who had to quit acting (well, almost!) to Sri Devi and Kareena Kapoor, all these women were the bombshells of their time only to be replaced by younger actresses. On the other hand, male actors like Shah Rukh Khan, Salman Khan, Akshay Kumar and many more are still playing the showmen alongside actresses who are younger than half their age! Why does such a difference exist between men and women? Why are men given so much importance even after they grow old? Will we ever know this?

#7 Media is a Major VILLAIN in the Storyline!

Media is a strong influence on the crowd. People believe what media tells them. Be it scams, scandals or link ups of co-actors, people believe it all. I myself think hardly anything of it must be true. In spite of such a clout among the audience, media utilizes it to play with people’s minds and tell them what’s not true. Media has often labeled people with an image opposite to their true nature. This has been a major reason why celebs aren’t very fond of media. Media should be unbiased and true while reporting news, they shouldn’t spread fake gossips just to create a buzz among their followers.

“The Bollywood Diva Song” portrays the harsh reality of the entertainment industry. AIB’s initiative to create an awareness among the Indian viewers has been a huge game changer and we hope to see many more thought-provoking videos which will bring a revolution in the traditional Indian society. Way to go, AIB & Kangana!