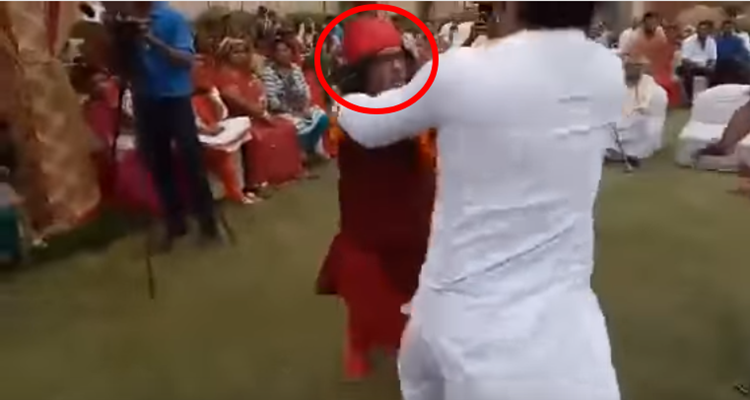 Swami Om ki Pitai! That’s what is going viral on all the news channels. The controversial “Baba” Swami Om’s video of getting beaten up has surfaced and the internet’s already trolling him. Swami Om has been in the news for all the wrong reasons since he participated in Big Boss 10.

Video of Swami Om Beaten up by the Public:

Why was Swami Om Beaten Black and Blue?

On the account of Nathuram Godse’s birth anniversary on Friday, a small function was arranged in the Vikas Nagar area of Delhi. Swami Om, Big Boss 10 fame, was among the special guests for the function. He was call up on the stage to make a small speech. Inviting a fake and fraud monk on such an event drove the crowd furious. It was an insult to them and they took no time to express their disapproval of Swami Om. The self-proclaimed saint was beaten up left right and center.

He somehow managed to get his car trying to run away from the mob. During this incident, Swami Om’s “long hair” (which were fake obviously!) fell down and Swami Om’s new look was disclosed! Now we know for sure that he is an imposter, well we didn’t have any doubt before.

As soon as he reached his car, people started to block his way. Some people even damaged his car, however, the damage wasn’t enough to stop him from escaping the chaos.

Swami Om’s news is the talk of the town again and we want people to be smarter to identify such crooks who take advantage of God-fearing people of our country.