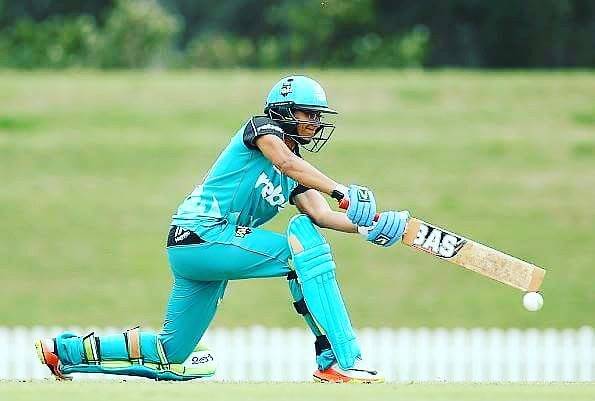 Today is Smriti Mandhana’s birthday and the Twitteratti can’t control their emotions! She is the run machine and is one of the most consistent performers who have taken the Indian women to the semi-finals of the ICC Women’s World Cup 2017. Check out our own Smriti Mandhana wiki to learn interesting facts about the new Indian sensation.

Smriti Mandhana was born on July 18, 1996, and is celebrating her 20th birthday today. Her father is Shrinivas Mandhana and her mother is Smita Mandhana. Smriti’s father is a chemical distributor by profession and is one of the support systems for her cricketing career. He takes care of her workout and daily practice. Her mother has taken up the responsibility of her daily diet and attire. She also has a brother named Shravan Mandhana, who has also played cricket till the district level. Her father was also a district level player having represented the Sangli district. Smriti completed her schooling from Sangli, Maharashtra. Smriti Mandhana’s family is one of the biggest inspirations behind her successful career.

Smriti started playing cricket from a young age and was selected for the Maharashtra state under-15 team at the age of 9. She continued with consistency for years to come until 2013, where she outshined and showed her greatness. In a match against Vadodara, Smriti smashed an unbeaten 224 off just 150 balls in the West Zone Under-19 tournament.

Smriti’s sublime form saw her progress from one level to the next one in no time. In 2016, she and Hamanpreet Kaur became the first among Indian women who were selected for the famous league. In 2017, she suffered a knee injury due to which she had to opt out of the league. The injury even left fans wondering whether she would be back to play the World Cup.

Smriti’s excellent performance in the 2015-16 season bore fruits and she was the only Indian to be featured in the first ever ICC Women’s Team of the Year in 2016. We hope that many more women make it to the rankings every year and make us all proud!

Smriti’s excellent performance has made all the Indian people scour for Smriti Mandhana’s images on Instagram and Facebook to check out who this young gun is! Smriti’s Facebook page is full of her photos from the training sessions as well as photos donning the respected Blue jersey. Fans can take a look at Smriti Mandhana’s Instagram to get a closer look at how the young player is in real life.

Here are some of the best Smriti Mandhana photos:

So Much Awesomeness in Just One Pic!