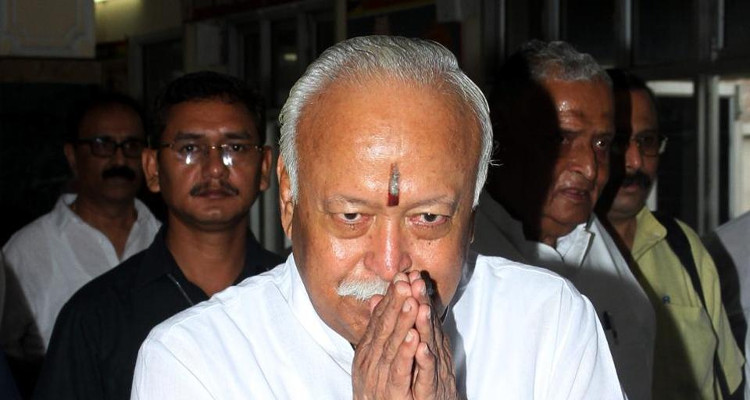 Earlier today, RSS chief Mohan Bhagwat was refrained from hosting the tricolor at a school in Kerala resulting in yet another political spur from RSS. The incident took place at Karnakiyamman school in Palakkad. The district collector of Palakkad stated that it was inappropriate for a political leader to hoist the national flag in an aided school. However, Bhagwat paid no heed to the threats and unfurled the flag without a doubt in his mind. I have never been a fan of Bhagwat’s views. However, his competency and proficiency make him a classic leader, respected by all. What makes RSS’s Mohan Bhagwat an infamous political hero? We’ll see 5 facts about Mohan Bhagwat that will lift you up from your chair!

Bhagwat was born in Chandrapur, Maharashtra. Mohan Bhagwat’s family are all RSS activists. This being said, there is no doubt that he was laid upon the meaning of Hindutva right from childhood. His father, Madhukar was Karyavahak (secretary) for the Chandrapur zone and later a Prant Pracharak (divisional promoter) for Gujarat. He has two younger siblings, both active RSS workers. Mohan Bhagwat’s caste is Brahmin.

Bhagwat’s Inspiration for Joining RSS was Molded by his Education!

Bhagwat completed his schooling from Lokmanya Tilak Vidyalaya. Inspired by freedom fighters like Lokmanya Tilak and Bhagat Singh, Bhagwat always wanted to serve his country in one way or the other. His family being staunch supporters of RSS, Bhagwat too paved himself a way into the gates of the Hindu nationalist organization. He completed his BSc from the Janata College in Chandrapur. He completed his graduation in Veterinary Sciences and Animal Husbandry from Government Veterinary College, Nagpur. Later on, he enrolled himself in a Post Graduate degree in Veterinary Sciences. However, the urge to join RSS was bigger than anything for the young Bhagwat. He dropped out of his post graduate course to become a Pracharak (full-time promoter/worker) of the RSS.

Bhagwat has done anything and everything for RSS. During the period of emergency, he worked underground. His work during the emergency made him a responsible worker of the RSS. He became Pracharak of Akola in Maharashtra in 1977. Bhagwat went on to become Akhil Bharatiya Sharirik Pramukh, India from 1991 to 1999. In 2000, Rajendra Singh and H. V. Sheshadri decided to step down as RSS Chief and General Secretary respectively due to poor health paving a way for K. S. Sudarshan and Mohan Bhagwat. Sudarshan was nominated as the new chief and Mohan Bhagwat became Sarkaryavaha (General Secretary). Mohan Bhagwat was appointed as the Sarsanghchalak (Chief Executive) of the RSS on 21 March 2009 when Sudarshan stepped down, becoming one of the youngest chiefs of the RSS.

Bhagwat is known to be a well-protected Indian!

Bhagwat was given Z+ VVIP security in 2015. With the  Central Industrial Security Force (CISF) being his cover, Bhagwat is one of the most protected Indian.

So here it is. Mohan Bhagwat’s wiki is one hell of a ride. Known to be a staunch Hindu nationalist, Bhagwat is known to have faced plenty of controversies. He is known to be bold and fearful. Mohan Bhagwat is said to be one of the most respected individuals within the RSS. Having said that, what remains to be seen is BJP’s reaction to today’s incident. Stay tuned to SocioFreak!