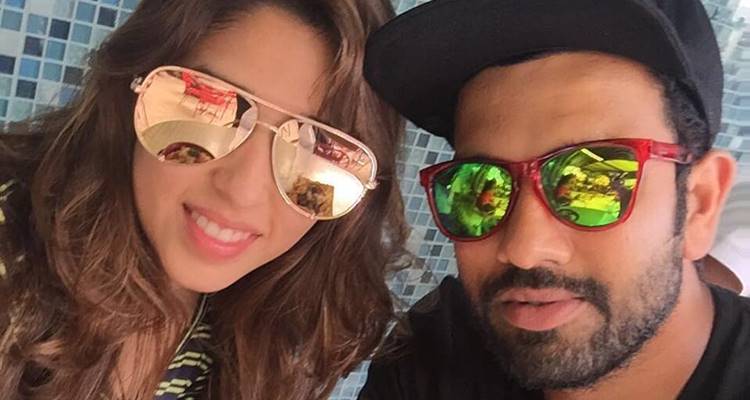 Mumbai Indians are on the verge of losing the IPL final against Rising Pune Supergiant. The Giants bowled extremely well restricting Mumbai to a minimal 129 in 20 overs. However, the one person who stole the limelight was Rohit Sharma’s wife Ritika Sajdeh. Her expression after Rohit’s dismissal was enough to convey the disappointment of Mumbai fans. Who is this gorgeous girl? Here are some must-know facts about Rohit Sharma’s wife Ritika Sajdeh’s wiki.

Ritika Sajdeh, age 29, is a resident of Cuffe Parade Mumbai. She and Rohit got married on December 13, 2015.

She is a Sports Manager

Ritika works as a sports manager in the famous Bollywood manager Bunty Sajdeh’s firm. That’s not all, she even managed Rohit for some time! She manages many more famous faces from the cricketing world.

Ritika and Rohit knew each other from six years before getting married. She even attends each and every game he plays. She posted a photo of both of them caption “Happy birthday to my main man and the best person I know. Happy Birthday Ro #RaiseTheRoof.”

Rohit Proposed to Ritika at the Borivali Sports Club, where he First Started Playing Cricket at the Age of 11

Ritika and Rohit’s love story went to the next level when he proposed to her back in 2015. But his proposal was not the simple way. He picked her up from her Cuffe Parade residence and drove her to the Borivali Sports Club, where he started his cricketing career at the age of 11. He proposed her on the ground and the damsel approved of it without any second thoughts.

She is the Cousin of Renowned Celebrity Manager Bunty Sajdeh

Well who knew? Virat Kohli’s manager Bunty Sajdeh is Ritika’s first cousin. He even said once that Rohit and Ritika met through him. Bunty was present at the couple’s engagement and their marriage ceremonies.

She is the Rakhi Sister of Yuvraj Singh

Now this is a shocker! Ritika has a brother named Kunal, however she considers Yuvraj Singh as her Rakhi brother. That’s so sweet!

She is a Dog Lover

Ritika Sajdeh’s Instagram is full of her hot pics. And along with them, her profile is full of dog photos. Ritika’s affection for animals, especially dogs is admirable!

Ritika’s Instagram profile boasts of her beautiful pictures with her family, dogs, her friends and her hubby Rohit. Here are some of Ritika’s gorgeous images: