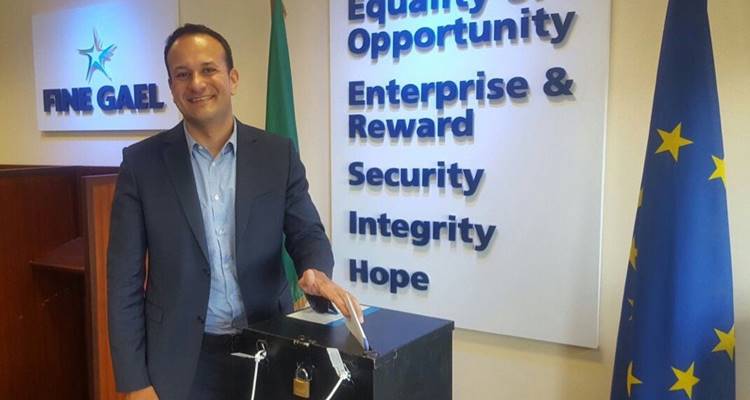 Today is a day which will be written in history. Ireland has a new prime minister who has Indian origins and is gay. Leo Varadkar is the man who has made us all proud. Varadkar will replace the previous Taoiseach Enda Kenny. Varadkar opened up about his sexuality in 2015 and is currently dating a doctor named Matthew Barrett. Enda Kenny resigned in the past month and this will take the European politics to a whole new level. Here’s Leo Varadkar’s wiki to know more about the first gay Prime Minister of Ireland.

Leo completed his schooling from St. Francis Xavier National School in Blanchardstown. He completed his secondary education from Palmerstown at The King’s Hospital in Ireland. He joined Fine Gael while completing his secondary schooling. He even served as the vice-president of Youth of the European People’s Party which was the youth wing of the Christian Democrat group. One of the major achievements of his early life was getting selected for the much appreciated Washington Ireland program which trains ambitious youngsters to take up leadership roles in the future.

Leo has long been involved in politics and has a serious interest in the public welfare and social causes. Leo stood for a local election when he was just 20 years old while pursuing the second year of his medical course. He contested the elections in the Mulhuddart area in 1999. However, he received only 380 votes and lost the seat. Without losing hope, he again contested in the 2004 elections receiving the highest preference vote with a count of 4894 votes and was elected.

Varadkar was elected to the Dail Eireann in 2007. He was re-elected to the same post again in 2011. He still holds the position till date.

Varadkar has been a leading politician in Ireland having held the positions of Minister of Transport, Tourism and Sport from 2011-14, Minister of Health from 2014-16 and the Minister of Social Protection, which he is still in charge of as of now. One more achievement in Varadkar’s career is being the youngest person to be elected as the leader of Fine Gael.

On his 36th birthday in 2015, Varadkar came out publicly in an interview which aired on RTE Radio. He said “it’s not something that defines me. I’m not a half-Indian politician, or a doctor politician or a gay politician for that matter. It’s just part of who I am, it doesn’t define me, it is part of my character I suppose.” He was the first gay cabinet member of Ireland who opened up about his sexuality. He was one of the staunch supporters of the same-sex marriage referendum. Ireland was the first country in the world which legalized same-sex marriage by a public vote in 2015.

Leo Varadkar’s boyfriend Matthew Barrett is a doctor by profession who works at the Mater Misericordiae University Hospital. He supported Leo’s bid for becoming the leader of Fine Gael. The couple has been dating for 21 months and has managed to stay away from the media. Their families are aware of their relationship and have accepted them. Both of them are fitness enthusiasts and are often seen running and going for hikes together. Leo Varadkar’s wedding details are not yet announced and we surely await for more information on the same.

Ireland is only the fourth country to have a gay person heading their government. Iceland’s Johanna Siguroardottir, Belgium’s Elio Di Rupo and Luxembourg’s Xavier Bette are the previous gay leaders. This is a sign that our world is changing and people are becoming open towards sexual preferences.

Leo Varadkar has become a Twitter sensation since the news came out. Leo thanked all his supporters via Twitter.

We are excited to see Leo lead the government to more prosperity and wish him all the luck. For more news, stay tuned to SocioFreak.