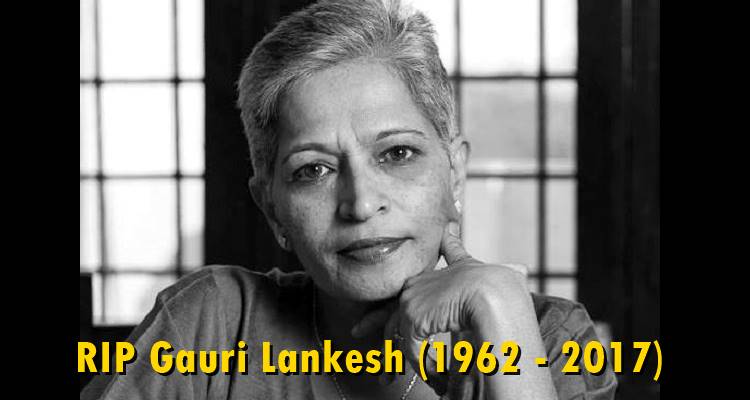 The controversies don’t stop when you are living in a nation like India. Every day some new terrible news hits us and shocks our core. From Baba Ram Rahim’s shocking rape case to Kangana Ranaut’s confessions on Aap Ki Adaalat, we have been through it all. Today another shocking story has made the rounds. Senior journalist and activist Gauri Lankesh was shot dead at her Rajeshwari Nagar residence in Bangalore. For most of the people who aren’t familiar with her, here’s Gauri Lankesh’s wiki to know about a journalist who fought till her last breath.

Gauri Lankesh’s age was 55 years at the time of her death. Gauri’s father P. Lankesh was the founder of the highly successful tabloid Lankesh Patrike which was weekly published. Her mother runs a Sari shop in Bangalore. Gauri Lankesh has a sister Kavitha Lankesh, who is into film making and a brother named Indrajit Lankesh who is also a film-maker.

Gauri was married to the renowned journalist Chidanand Rajghatta. Gauri Lankesh’s husband Chidanand Rajghatta is an Indian opinion columnist who currently lives in Washington D.C. He also works as a liberal blogger for the Times of India. However, the couple got divorced later, they were married for an unknown period of time.

Gauri Lankesh was the chief editor of their family’s political tabloid Lankesh Patrike which is a very controversial magazine and a popular one. Gauri was a fearless journalist and never resisted to express her views about the Indian politics. She had made the news for all wrong reasons for multiple times due to her ideological differences. She was a vocal critic of the right wing. She was also sentenced to jail for six months in November 2016 for a defamation case filed by the BJP leader Prahlad Joshi.

Prakash Belawadi and Gauri Lankesh were childhood friends who knew each other for more than 35 years. Both were known for their outspoken nature and vocal stands against injustice. However, a rift was caused between them when Belawadi sided with the BJP as their media advisor. The reason he expressed for supporting BJP was that he wasn’t in favor of the Congress. This enraged Gauri who took shots at Belawadi on social media.

Gauri Lankesh’s murder was a gruesome scenario. It was reported that some unidentified men shot at Gauri seven times out of which three bullets hit her on the neck and chest. She collapsed and died on the spot. This incident took place around 8:00 pm.

We wish that we have more firebrand journalists like Gauri Lankesh who would go much more beyond their capabilities to find out the truth and present it to the common people of our country. It is indeed a sad event that such a journalistic pioneer had to lose her life due to hatred and freedom of speech. SocioFreak pays its deepest condolences to Gauri’s family.