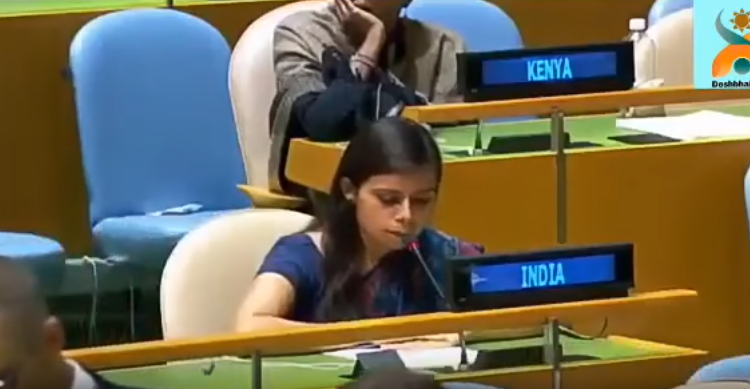 The United Nations General Assembly has commenced and so far has been a wild ride. From the Donald Trump-Kim Jong-un’s cold war to India vs. Pakistan debates about terrorism, we have experienced them all. During the discussion of so many worldly issues, one name stands out among the crowd. You must have heard or read about her, but how much do you know about her? You might have guessed it, we are talking about the Indian firebrand Eenam Gambhir who has set the UNGA on fire with her powerful speech. With her mind-blowing command over language and strong words, she has won millions of hearts all over India. So, who is this Eenam Gambhir? If this question bothers you, we will solve all the mysteries in our version of Eenam Gambhir’s wiki.

Eenam Gambhir is the First Secretary in the Permanent Mission of India to the United Nations in New York. While many want to know Eenam Gambhir’s age, there are no confirmed reports about her date of birth. Eenam completed her early education in Delhi where she graduated from DU’s Hindu University. She graduated from the mathematics discipline. Reports claim that she also holds a degree from the University of Geneva.

Eenam went on to appear for the UPSC examination. She passed the highly competitive exam in her first attempt and chose the Foreign Services department. She passed with flying colors from the 2005 batch. She is an IFS officer ever since.

Eenam Gambhir’s IFS career started in Madrid, Spain. Her posting in Madrid was as the third secretary where she learned Spanish as the foreign language. Her other assignments include posting in Argentina and then Brazil. Her Argentinian mission was reportedly one of the biggest missions in South America. She has also served in Geneva and on the Pakistan desk India’s external affairs ministry. Ex-MEA spokesperson Syed Akbaruddin was a mentor to Eenam.

Eenam’s speech has created a viral wave on social media. People who have heard her speech are no doubt impressed but feel proud to have such a talented spokesperson represent our country at such a big stage. Eenam’s strong response to Pakistan’s Prime Minister Shahid Khaqan Abbasi’s speech was a big awakening for all the nations around the world. Well, how much can you hear about peace from the country which has hosted some of the most-wanted terrorists including Osama bin Laden and Dawood Ibrahim?

Eenam in her UN speech said that Pakistan has went on to become synonymous with terror in its short lifespan. She went on to refer to the splitting of Pakistan as the “production of the land of terror.” However her next line was the most echoed line of her speech, if not of the whole UN sessions on that day. “Pakistan is now Terroristan” was the line which almost every Indian must have heard by now. She also questioned how Hafeez Saeed, one of the co-founders of Lashkar-e-Taiba was allowed to establish and run a legitimized political party. Eenam’s speech has raised so many questions and we wonder whether the issues revolving around these questions will ever be solved!

This is not the first time we have heard Eenam take a jab at our neighbors. At the 2016 UNGA, Eenam responded to the then Pakistan Prime Minister Nawaz Sharif’s speech with a power-packed speech of her own. The most remembered lines of her speech were when Gambhir referenced the Land of Takshila, “The Ivy League of Terrorism.”

Here’s is Eenam Gambhir’s Full Speech at the 2017 UNGA:

People are losing their minds over Eenam Gambhir’s husband. But wait, does he even exist? As per the Permanent Mission of India to the UN’s official website, she is regarded as “Ms. Eenam Gambhir.” Isn’t that enough for a proof?

Some sources also claim that Eenam believes in social change and is a connoisseur of art and heritage.

We couldn’t get enough of Eenam at the 2017 UNGA and we wish to see more of her hard-hitting responses to our immediate neighbors. Eenam has done a great job and made us all proud with her speaking skills. We at SocioFreak hope that more such people come forward and represent our nation at such worldwide platforms. You have a done a great job indeed Eenam! All the best for your future endeavors. For more news, stay tuned to SocioFreak.