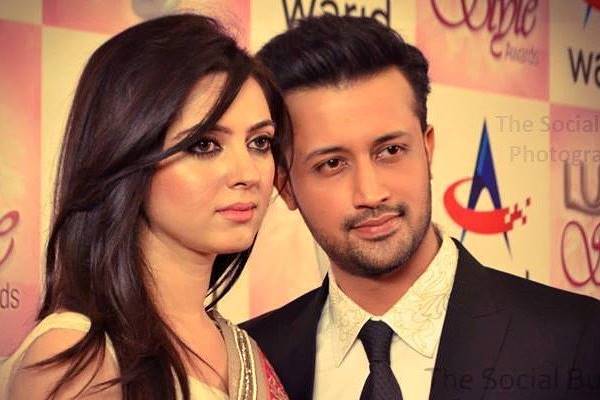 Atif Aslam has been mesmerizing us with his magical voices for many years. His first hit Doorie is a song in the playlist of every millennial. Atif’s latest song from Salman Khan’s Tubelight is out and the singer is back in news. Atif Aslam is known to each and every music lover but what people don’t know about is Atif’s lady love, his wife Sara Bharwana. Today we are diving into Sara Bharwana’s wiki to know some mind blowing facts about Atif Aslam’s wife.

Sara Bharwana, age 32, was born on July 7, 1984, in Lahore, Pakistan. Sara belongs to the renowned Bharwana caste who were originally from Rajasthan, India and converted to Islam under the spiritual guidance of Baba Farid Ganj Shakar, who was a Sufi poet. The Bharwanas are considered among the most Royal families around the world. Sara studied at the Kinnaird College, Lahore. Not much is known about Sara Bharwana’s family. Sara Bharwani’s father was in the Punjab Police force.

Reading about Atif’s wife is a major heartbreak for all his female fans. Every girl dreams of having a guy like Atif after listening to his enchanting voice. And we couldn’t agree more! We just fall in love with his voice each time we hear his songs! But did you know that the inspiration behind his charming voice was his wife? Well, Atif has told in many interviews that Sara is a lucky charm for him and has been a big support system in his successful career.

Reportedly, Atif and Sara attended the same school till their intermediate studies. Later they went to separate colleges, Atif attended Government College, Lahore while Sara went to Kinnaird College which is also in Lahore. The couple was said to be dating for seven years before getting married on March 29, 2013, in Lahore, Pakistan. Since the couple has tied the knot, Atif Aslam’s marriage pics have been among the most heavily searched terms on Google!

The couple was blessed with a baby boy in 2014 and was named Ahad Atif. Atif and Sara are often seen together attending various functions and award shows in Pakistan as well as India.

Sara is a Teacher by Profession

A singer and a teacher? What a deadly combination of parents baby Ahad has!

Well, if you are here for Sara Bharwana’s images, then finally your wait is over! Here are some of Sara’s hottest and most elegant pics:

Sara with having a conversation with baby Ahad