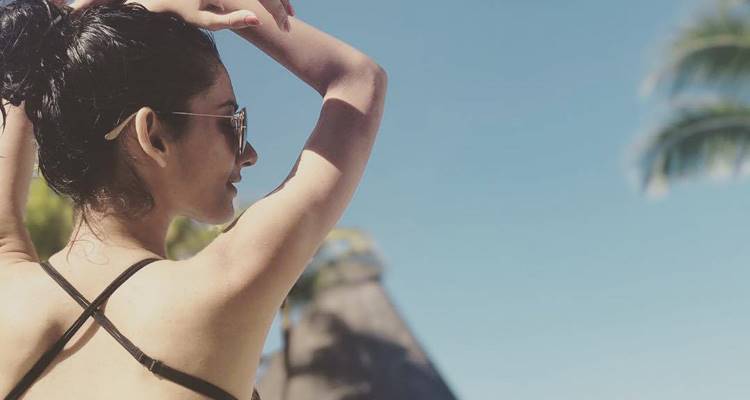 Still thinking making it big in Bollywood is the ultimate goal? You might want to think again after looking at the 22-year old Aneri Vajani. She is a young sensation who has made a mark in the Television industry. You probably know her as Dusky from Beyhadh, but we bet you didn’t know these facts about her.

Here are some juicy facts from Aneri Vajani’s wiki.

Aneri Started Acting at the age of 18

Aneri’s age is just 22 and she is already playing a lead role in Beyhadh. She started her acting career at a very young age of 18 with the TV show ‘Nisha Aur Uske Cousins’ where she portrayed the role of Nisha. The show aired for a year and after that Nisha landed roles in ‘Pyaar Tune Kya Kiya’ and ‘Yeh Hai Aashiqui’. She has a long way to go in the TV industry and we might also see her in Bollywood flicks soon!

She shared a very Special Bond with her Grandfather

In an interview with Hindustan Times, Aneri said she isn’t eager to play saas-bahu roles. She also added “I might play a bahu eventually, one should never say never, but for now, I want to play the role of an independent girl, who wants to live life on her terms. I am only 22, so no saas-bahu or bechari-type roles for now. My new show will showcase that I can play a tomboy and a regular girl with equal aplomb.”

She had built a tomboy image of herself when she played Nisha in NAUC. She even attended some workshops to behave like a tomboy. Eventually, her hard work has paid off and she has been getting good roles.

Aneri Vajani’s Instagram account is full of interesting posts. From her personal life to her hottest pics, all of her posts are entertaining. Her photos from the sets of Beyhadh just make us jealous of her extravagant lifestyle.

Now this one was a shocker! So Close! For a minute we almost couldn’t guess whose Audrey and whose Aneri!

She is a Die-Hard fan of Salman Khan

Aneri is a huge fan of Salman Khan and jokes about marrying him. She also shared a photo with him on his birthday. We hope Bhai is on his way with a “Baraat” for you!

Though Aneri achieved fame from NAUC, she is still in the limelight with her new super hit show ‘Beyhadh’. She plays the role of Saanj also known as ‘Duski’ who is a lawyer and Arjun’s childhood best friend. Till now, she hasn’t been at the center stage as most of the episodes were on the build of Maya & Arjun’s love story, however, the latest promos suggest something else. Stay glued to ‘Beyhadh’ for the latest news!

She would Love to be Ironman!

This one’s a no-brainer! Who doesn’t want to be Iron Man? We believe in your dream Aneri!

Kushal Tandon is not Aneri Vajani’s BOYFRIEND! [SPOILER ALERT: She is Single!]

All sorts of rumors have been going around about Aneri Vajani’s boyfriend. During NAUC, she was rumored to be dating Mishkat Verma, but none of that was true as both haven’t accepted it. Currently, rumors say that Aneri and her co-star from ‘Beyhadh’ Kushal are dating but she has denied the rumor straight away! However, both of them make a cute couple onscreen (if we are up for a Maya-Arjun separation obviously!). Aneri Vajani has openly said that she is “Single” and “Not ready to mingle” making it clear enough for us.

Im very much single nd not ready to mingle ! Nd especially not ready to get Married at all! Get a life guys! Jeeoo aur jinedooo! ??

Aneri has been inspiring us for many years, the way she is achieving success in her life makes us proud and be like her! Go Aneri, Just Keep Rocking!