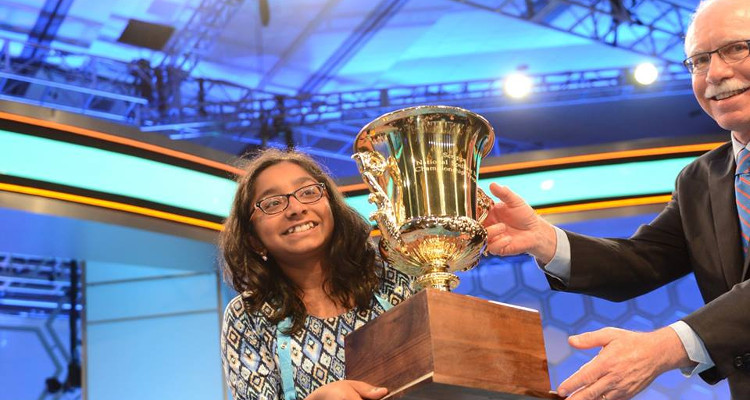 There are moments in our lives where we just feel proud about our origin. This is one such moment. Ananya Vinay, a 12-year-old Indian-Origin girl has won the 90th Speeling Bee 2017.The Scripps National Spelling Bee, 2017 was held at the Gaylord National Resort & Convention Center in National Harbor, Maryland on 30th May 2017. What is surprising is that it’s the first time since 2013 that a solo champion has been announced! If you tell me you aren’t intrigued, I’d call you crazy. So who is Ananya Vinay? Where is she from? Which school does she attend? All your questions about Ananya Vinay’s wiki will be answered today! So read further to know more about the 2017 Scripps National Spelling Bee Champion!

Ananya is a Sixth-Grader from Fresno, California. Her father’s name is Vinay Sreekumar. Ananya is known as a modest girl with a passion for reading and writing. The efforts she must have taken to bag the championship are beyond words. In Spelling Bee 2016, Ananya wasn’t even in the top 50 participants. Imagine the amount of dedication and hard-work this little girl must have done! No wonder Ananya’s parents are so proud of her.

Ananya is gifted! No doubt!

To be the champion amongst 300 equally dedicated participants is not a joke. Ananya is a gifted speller! You ask me why I call her gifted? Well, that means you haven’t watched Spelling Bee 2017. Ananya was not bewildered by any of the words she was given. She knew them all. Throughout the tournament, Ananya was calm and composed. Here’s a video of Ananya’s Spelling Bee interview:

I guess we Indians are born brilliant? Aren’t we? Ananya Vinay is the 18th of the 22 Indian-American winners, Spelling Bee has witnessed. The first Indian heritage winner of the Bee was Nupur Lala in 1999.

The finals of Spelling Bee were rather interesting. It was either Rohan Rajeev, a 14-year-old eighth-grader from Edmond, Oklahoma or Ananya Vinay! The battle went on for 20 rounds! At the end, Ananya correctly spelled two words in a row, ending on “marocain,” which means a type of dress fabric of ribbed crepe while her opponent missed a simple-looking but obscure Scandinavian-derived word, “marram,” which means a beach grass to win the 90th Scripps National Spelling Bee on Thursday

Yes, Ananya received a cash prize worth 40K! Imagine what the 12-year-old will spend it on. Candies?

We hope to see Ananya in Spelling Bee 2018 as well! Proud of you Ananya. Get going! Stay tuned to SocioFreak