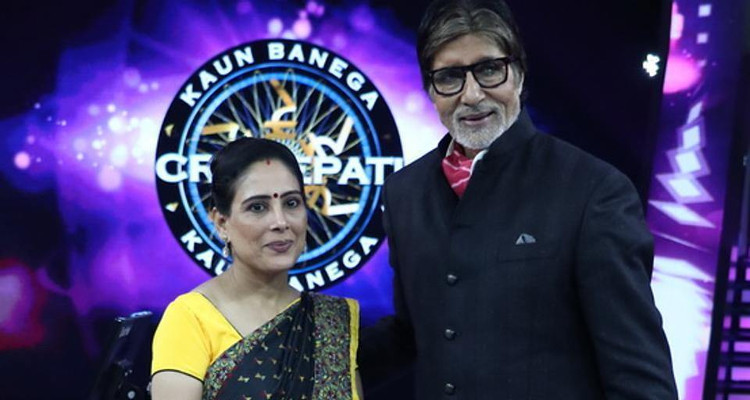 Today is a day of celebration for all the Indian women out there and SocioFreak wants to be a part of it! Kaun Banega Crorepati (KBC) season 9 witnessed its first millionaire and you guessed it right, it is a woman! Anamika Majumdar’s KBC performance has been one hell of a thrill to watch! It was a proud moment indeed when in today’s KBC 9 episode 26, Amitabh Bachchan felicitated Anamika Majumdar with a cheque worth ₹1 crore!

Also Read: Everything to Know About Bigg Boss 11 Contestants!

A Bright Mind From Jamshedpur!

Anamika hails from Jamshedpur, India. She is known to be a vivid social worker. The KBC 9 winner is 41 years old. She has a family of four; Anamika’s husband, Satyaprit Majumdar and her two children, son Arnab and daughter Prerna. She lives in a small apartment in New Bairdari, situated at Sakchi, Jamshedpur with her family and parents. Her mother, Sabita Basu was seen crying with joy on her daughter’s success. Her entire family was present to watch Anamika Majumdar’s KBC performance. What a proud moment for all of them!

Back in Jamshedpur, Anamika runs an NGO named “Faith in India”. Faith in India is a non-profit organization which helps in the development of the rural areas in and around Jamshedpur. Known for her social development activities, many people from the rural areas of India respect her. When asked by Mr. Bachchan about her reason to contest in Kaun Banega Crorepati, she simply answered, “I want to see India develop. I will use the money to build a bigger foundation for my NGO. I have no personal gains. My NGO was the only reason I ever contested in KBC. I want to help develop the rural areas in Jamshedpur.”

Anamika is the closest anyone has got to the 1 crore mark in KBC 9. Before Anamika, Brijesh Chaudhary reached 50 lakh and decided to stop. Her performance in KBC has been a journey filled with hope and thrill. On Tuesday night, Anamika managed to become the first crorepati of KBC 9. She even qualified for the ₹7 crore question but decided to put a raincheck on it. Smart move, huh? After selecting the right answer for the 1 crore question, Anamika decided that it was too risky to continue. However, the thing that bugs me to the core is that she even knew the answer to the 7 crore question! What is she, a computer?

Also Read: Who is Sshivani Durga? The Tantrik of Bigg Boss 11!

When Amitabh asked Anamika Majumdar the 1 crore question, “Which of the following pairs is not a parent and child, who have both won Nobel Prize?“, she looked rather ambivalent. However, after sparing a few more minutes on the question, her smile said it all! She was confident about her answer. She promptly selected the correct answer: Hermann Emil Fischer and Hans Fischer. There were flares of claps and laughter among the crowd and Bachchan quickly hugged her! Anamika Majumdar’s husband and children rose up and started pouring tears of joy for their iron lady. A moment to watch!

SocioFreak congratulates Anamika for her splendid performance in KBC 9! She has become an inspiration for all the Indian women out there who think less of themselves. A proud moment for India indeed! Jai Hind!

Also Read: Why is Sapna Choudhary the Best Contestant of Bigg Boss 11?

Hope you liked Anamika Majumdar’s wiki! Stay tuned to SocioFreak for the latest news about KBS 9! Have a good day…